This is Dr. Martin Cooper, the man generally credited with inventing the cellular telephone. He is holding a prototype of the Motorola DynaTAC, the first handheld mobile phone. The DynaTAC cost $3995 (in 1983 dollars!), was the size of a brick, and weighed one and three-quarter pounds. A full charge would give you 30 minutes talk time or about eight hours standby.

You also looked like a bit of an idiot carrying one around or making a call on it.

For at least a decade after the DynaTAC’s release, mobile phones were stereotypically cast as toys of the wealthy and self-important. Growing up in Australia at the time, it was not uncommon to refer to them as “wankerphones”. 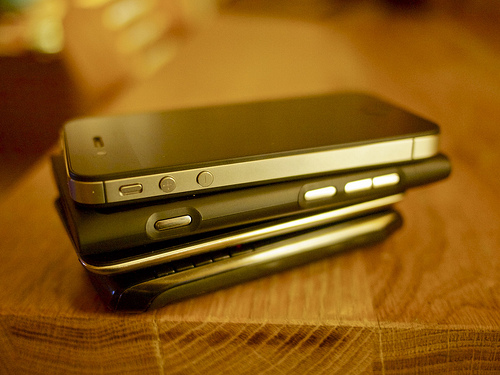 This is a phone stack. Some bright spark came up with an idea where everyone at dinner stacks their phones together on the table, and the first person to grab their phone back from the stack, even if it is ringing, has to cover the bill.

Even thirty years after the release of the DynaTAC, we’re still working out new social mores and tricks to deal with its intrusion into our lives.

I'm pretty bad at predicting the success or failure of new technologies, I just think it's a little too early to write off something as potentially game-changing as Google Glass base on how it looks today, what it costs today, or based on the fact that we're currently entrusting one of society’s most socially tone-deaf groups (nerds) with the question of when it's appropriate to wear them.

Previously: Why We Should Teach Programming

Next: Killing in the Name Of