It’s easy to forget just how exciting and revolutionary ICQ was. Almost overnight it took two of the most powerful features of the walled-garden online services—being able to see when your friends were online and message them in real time—and brought them to the Internet. People signed up in their millions, and for good reason.

Unfortunately, while everyone loved the service, it only took a couple of upgrades before the client software was universally loathed.

The problem was there was only one company making ICQ clients. Thus there was no competitive pressure to improve the core experience of sending and receiving messages from your friends, but boy was there pressure to add just one more advertisement panel, or yet another button to pump sponsored newsfeeds and stock quotes to millions of entirely uninterested college students.

Normally there's an outcry when a fresh exciting company sells out to an evil corporate behemoth, but by the time ICQ sold out to AOL the reception was just a collective “Meh, merge it with AOL Instant Messenger already.”

Which brings us to today’s announcement from Twitter directed to its third-party developers, saying in essence:

Twitter has always grown on the back of outside innovation. Features like #hashtags, @username links and retweeting were all things that users came up with on their own to help manage the flow of information. Third-party clients and services built features on top of these conventions, and eventually they were folded into the core of the product.

On the client side across mobile and desktop platforms, Twitter mostly stayed out of the way and, as John Gruber noted two years ago, third-party Twitter clients were a locus of innovation in mobile application UI design.

One of the fantastic things about Twitter clients is how easy it is for users to jump from one to another. Just type in a username and password and off you go. It's possible for anyone to write a Twitter client nowadays and have the opportunity to completely blow everyone else out of the water. It's very exciting. Very democratic. And it certainly seems like everyone and their mother is trying to do just that. I'm just happy to be part of it, I know the developers of other clients and I can say definitively that competition is making all of us write better apps.

That quote is from Loren Brichter, developer of Tweetie, in an interview with Macworld. Brichter now works for Twitter. Tweetie was rebranded as the official Twitter client for Mac OS and iOS.

Saying that the time for competition and innovation in Twitter clients is now over, and that all the platform now needs is “A Consistent User Experience” strikes me as akin to the apocryphal story of the man who quit the Patent Office in 1899 because everything had already been invented. And with two of the banner features of the latest Twitter client update being the addition of a tremendously unpopular overlay for (often-sponsored) trending topics and a lock-in to Twitter’s URL-shortening service, the direction is worrying. 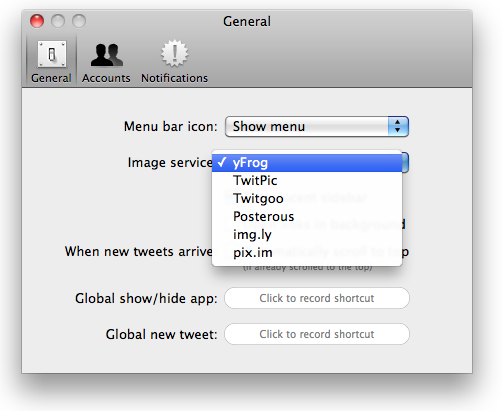 If my service was on the above list and not already in the process of being sold to Twitter, I'd be shitting myself about now.

It's a silly battle that's been fought before. Instant Messaging services spent the good part of a decade attempting to lock out third-party clients and losing because you just can't fight the demand for something you can't deliver yourself.

Official clients have a massive advantage in exposure, user inertia and immediate access to new features. Twitter admits as much in the announcement, pointing out that 90% of Twitter users already regularly use the official client. If a third-party client becomes so popular that it is causing a noticeable impact on market-share, there is something very, very wrong with the direction of in-house development.

Third-party clients have more freedom to experiment and innovate, and can serve niche markets saving the official client from having to be a one-size-fits-nobody pastiche of conflicting requirements. And even if those clients do not give the service any direct revenue, Metcalfe’s Law ensures that the people behind the screen make the service more valuable for everybody else.

Next: Fear of Flying