At some point in your career, you're probably going to have to stand up and speak in front of a room full of people. If you're a developer you could be giving a presentation at a user group or conference, or you could just have been called on to address a staff meeting. If the room and audience is large enough, you'll be wearing, holding, or standing in front of a microphone.

Speak to the audience, not the microphone.

Most people who aren't used to it talk as if they are speaking to the microphone. Intuitively, this makes sense because the whole point of having a microphone is so it can pick up your voice and deliver it to the audience: 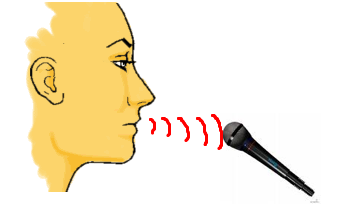 The problem is that a microphone can only amplify what it is given to work with. If you are talking only as far as the microphone, the voice that reaches the mic will be too quiet to amplify effectively. Even if you increase the gain your voice is still going to sound weak, and there's only so far you can push it before the microphone starts picking up too much ambient noise and you're competing with your own feedback. 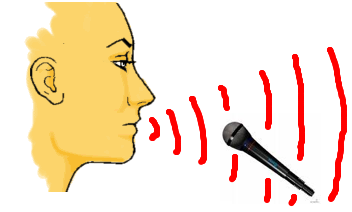 The best way to use a microphone is to pretend it isn't there. Talk to the audience, project your voice like you're speaking to a room full of people, and just put the microphone in the way.

Sometimes you'll be given a clip-on lapel mic. You've probably seen these things used on TV, they get clipped on halfway down someone's collar. This is because on TV they have a lot more control over ambient noise, acoustics and the audience than you ever will.

If you get given a lapel microphone, all the above advice applies -- if you don't speak clearly and loudly, it won't pick up what you're saying -- with one additional factor. Move it up. Don't hang the mic halfway down your chest, clip it as close to your throat as you can. That way you'll at least give it a half chance of picking up what you're saying.

And if it's not doing the job, don't be afraid to unclip it and hold it in front of your mouth.

Next: A Public Service for the FSF