Last night's dream (Well, this morning's dream. I always have the best dreams when I wake up, then go back to bed for a few hours) opened with me not knowing who I was. All the people around me were concerned: I'd been through some kind of time-travel event, and I wasn't allowed to do time-travel.

As I slowly came to my senses, I discovered I wasn't a particularly nice person. This was the future, and I was some kind of fascist secret policeman, responsible for all sorts of torture, 'disappearances' and so on. As my memory started to return I felt rather guilty about this, but the more I fell into my old role, the more it became part of me.

Eventually, my authority came crashing down. The sky was burning, there were earthquakes, the world was quite literally ending. At the same time, there was a coup and I was placed under house-arrest.

By a characteristically perverse piece of dream-logic, I was able to convince my captor not to follow me to the bathroom by telling him I couldn't escape because I wasn't wearing a belt. Luckily, I had a belt secretly stashed behind the toilet, so I could put it on and climb out of the window without having to worry about my trousers falling down.

I ran down to the beach, where I met my old friends, who had stuck by me for some reason. We talked -- the world was in the final stages of dying around us, but the beach was an island of peace in the middle. During the conversation, I had this sudden moment of epiphany. I began to tell each of my friends things I couldn't possibly know about them, and about the world.

Then, in the final moments of the world dying, the sea tumbled over me, the sand rushed up to cover me, sucking me into itself. The earth swallowed me up. I realised, as the planet reformed anew around me and I became one with it, that I was God. 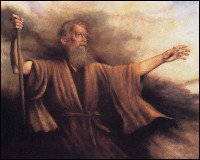 The dream ended, I kid you not, with me walking down the beach in my new world, in some non-specific biblical time-period, talking to two of my prophets about how I'd really been God all along -- the whole "time-travel" thing at the start of the dream was just some way I had been torn out of my rightful place, and the world had gone insane as a result -- and where we could find a bite to eat.

Eventually we found a marketplace. I bought one of my prophets a funny blue foam head on a stick. It had a long tube-like nose that bounced when you shook it. He loved it. Then I woke up.

Next: Charles' Rules of Online Forums