Along with all the other lemmings, this week I upgraded to IntelliJ IDEA 5.0. My short review is that it seems to have lots of cool and interesting new stuff in it, but I haven't got around to using any of it yet.

Anyway, after using the IDE for a few minutes, I noticed this strange little guy sitting at the bottom of the screen:

Curiously, I clicked on him and discovered that he manages the degree to which IDEA will interfere with your viewing of a file. 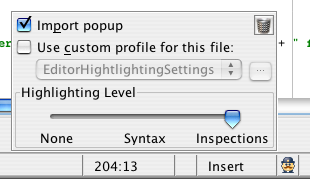 If you turn down the level of code inspection, the Inspector (as I started to call him) will turn his back. It's supposed to indicate he's no longer watching the code, but it looks a little like you've pissed him off by deactivating him, and now he's snubbing you.

Of course, it's obvious that JetBrains have a lot of big plans for this little guy. I mean, once you've got this friendly character sitting on your screen watching over your code, it's only a matter of time before...