Because I Had To 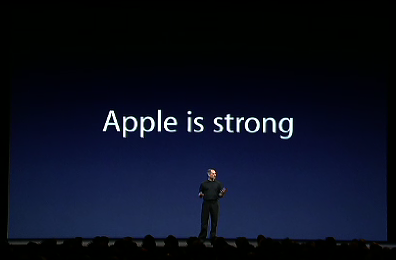 The first thing that sprang to mind when I saw this shot during the keynote was “Leni Riefenstahl”.

(I originally had a different gag here but someone pointed out it'd been done a couple of years ago in similar circumstances, and it was already being spectacularly misinterpreted on Livejournal)

Apple have been lobbing grenades at Intel ever since the G3 was released. (See also, the Intel guy on stage during the keynote: “They set fire to our bunny-man!”) The performance comparisons between PowerPC and Intel have always been fiercely debated, but Apple have insisted on, and heavily marketed, the superiority of the PowerPC in both speed and architecture. Intel, of course, never responded directly because when you're winning, you don't have to.

Now during the keynote, Steve Jobs has the mammoth task of turning all that marketing around with a single “Integer units per Watt” bar graph. Eight years of “Megahertz myth”, architectural arguments and slightly dodgy benchmarks have to be erased in half an hour. (Leaking the story to the press the weekend before the event helped soften up the crowd a little, I suspect).

Of course even the Macintosh most faithful who have made the pilgrimage to WWDC to stand in the full force of the reality distortion field are going to be a little stunned after the announcement. So after it's all over, Steve stands calmly under the words “Apple is strong”, projected three feet tall in the familiar, reassuring Apple font, and tells everyone it's going to be alright.

And we believe him, because he's Steve Jobs.

Previously: Things I Learned Watching Revenge of the Sith

Next: Reaffirming My Faith in Humanity