Applications that Changed My Life: Quicksilver

Continuing on from: Applications that Changed My Life: screen

The most recent application to change the way I use computers has to be Quicksilver. When you first sit down with Quicksilver, it looks like a clever application launcher. You type command-space and a few letters (or initials) of the application you want to run, and Quicksilver finds and runs it. Very useful, and sure beats tracking the application down in the Finder (or in Windows' ever-changing start menu, in which I can now officially find nothing without searching for five minutes). That said, LaunchBar did that before Quicksilver, and LaunchBar didn't change my life.1

Back in the 90's, during the perpetual floating flamewar between the command-line faithful and the new GUI upstarts, the mainstay of the CLI argument was the power of the pipe. By joining these little tools together, you could do lots of useful things, very quickly.

Quicksilver is the best tool I've seen so far that takes the pipe and makes it part of a GUI. Hidden just under command-space are all your applications, files, contacts, bookmarks and more, and a growing collection of tools to do interesting things with them.

As a trivial example:

Step one: grab a file: 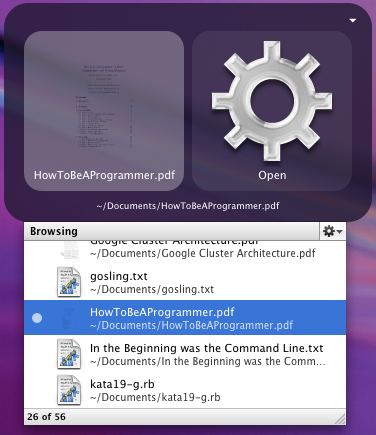 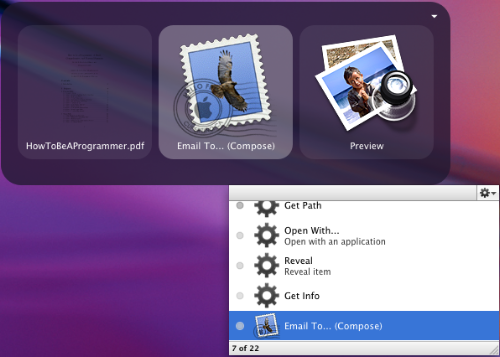 Et voila! At every point, Quicksilver will help you with a smart type-ahead find that remembers what you do most often, and pushes those options to the top of the list.

43 folders publishes a lot of useful Quicksilver hints and tips, and also had a recent interview with the creator of Quicksilver that contained these gems:

43 Folders: What are the unique challenges of developing for a Mac audience?

Alcor: We are a very outspoken and discerning bunch. Apple has pretty much spoiled us rotten, Half want speed and half want functionality, but everyone seems to want class. The mix of old school mac and unix users has led to very diverse expectations, but despite their fervor the users are tolerant of inconveniences, eager to troubleshoot, and quite innovative. A lot of the better features of QS came from requests.

43 Folders: What is the best power user Quicksilver trick that nobody uses (or knows about)?

Alcor: Hard to say. People seem to keep finding features that were coded at 5 in the morning and promptly forgotten, so the problem is that nobody knows about them. The best new ones are probably the search contents action and the ability to collect multiple items with comma (B30). It is kinda buggy at the moment, but it will become more and more useful as support for that syntax propagates down to all the plugins.

A co-worker once complained that Quicksilver had ceased to function: because the application is still in beta, copies expire after a month or so to force you to keep current. His complaint wasn't so much that Quicksilver stopped working, it was that his Powerbook was unuseable without Quicksilver. That's pretty high praise.

1 LaunchBar is now playing catch-up, growing to do the same sorts of things Quicksilver does, but it seems to lack the hacker spirit.

Next: Why "Empire" is the best Star Wars movie