After years of mediating between people who pronounce each letter individually, and people who say "sequel", I want to make it clear that the correct pronunciation of SQL is: 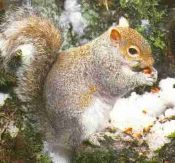 Thus, we have PostgreSquirrel, MySquirrel, and if you're a masochist, Microsoft Squirrel Server. HSQLDB is a little harder to pronounce, until you realise it's really called "HyperSquirrel".

Next: Sam Ruby on the Atom Wiki