While having my leaving-work drinks last Thursday, I had another encounter with the "Three Minute Angels".

It's a pretty clever business-plan. Recruit a small army of young, attractive women. Send them around Sydney's pubs in the evenings after work, offering neck and shoulders massages to the patrons (most of whom are cubicle-dwellers like myself). Technically, they seem to be covered by the same laws as buskers, which means they can't set prices, just ask for a 'voluntary donation' after the massage is over.

Of course, nobody out in the pub after work will want to look stingy in front of their mates.

The massage was great. I rarely exercise, spend most of my day sitting at a computer, and have disgustingly bad posture. A relaxed neck and shoulders is just what I need.

While trying (unsuccessfully) to find a website for the afore-mentioned angels, I came across this old article from the Sydney Morning Herald describing the way a PR company is attempting to fake word-of-mouth advertising by sending out employees to give people "personal recommendations".

I'm pretty sure I've seen this in action.

I got on the train once, I think it was on the way back to Sydney from Alan's place. Two people got onto the train in the middle of a rather loud discussion about mobile phone plans. Something about it just struck me as being a little... artificial. It's amazing how cynical you have to be these days. All the advertisers desperately want to fake 'genuine', and those efforts are slowly making a fiction of everything.

My cousin Kate and her husband Nick are visiting Sydney this weekend, so I've been doing my bit to show them around. Yesterday, we climbed up to the top of the Harbour Bridge. They don't let you take your own camera (or in fact, anything you could potentially drop) up with you, but they do take a few official photographs, which they then sell back to you for an exorbitant sum. 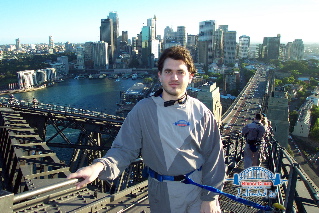 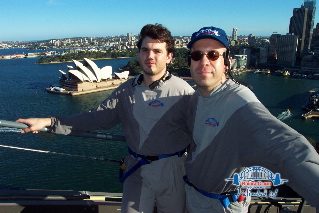 It was really cool. We managed to pick the clearest day in weeks--no clouds, low pollution--so you could see what seemed like forever in every direction. And standing on the cross-platform right at the top of the bridge between the flags, looking down through the mesh floor at eight lanes of traffic a hundred metres below, was pretty trippy for a guy who suffers from mild vertigo.

I didn't notice the vertigo for the whole climb: I enjoyed the whole thing and felt really relaxed about it. Then, about halfway down the arch on the way home, I noticed that my legs were shaking. Some little gland in the corner of my otherwise calm brain must have been quietly screaming what the HELL are you doing up HERE?, and pumping adrenalin through my body without me even noticing it.

While the climb was cool, though, I can't really say it was $175 worth of cool. Certainly not something I'll be doing again unless they drop the price, or some gorgeous female tourist begsasks me to accompany her.

Today my mother and I took the cousins to Bondi. English tourists have to go to Bondi, it's just one of those necessary, inevitable facts of life.

We had breakfast (well, for some value of breakfast, since it was well after midday before we ate anything) at a cafe by the beach. A few doors down, some very picturesque women wearing very little were giving away candy-floss. Sadly, I didn't get any photographs, nor did I ever find out quite what they were selling.

There seemed to be pairs of them dotted around the foreshore. I started wondering whether they were being secretly cloned in vats.

Also, while wandering down by the beach, my mother remarked to the tourist cousins that you don't really get any topless bathing in Australia, which is blatantly untrue, and makes me wonder if female eyes work somehow differently to male eyes.

Next: Just Set the Halt